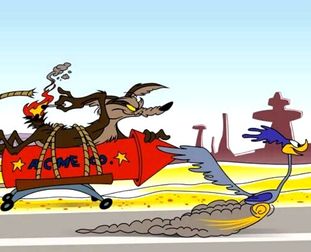 I can’t tell you how many hours I spent watching Bugs Bunny avoid Elmer Fudd when he was hunting rabbits. I watched Sylvester the Cat endlessly try to capture Tweety Bird, and I still remember some of the unforgettable statements Foghorn Leghorn made as he escaped trouble in the barnyard.

But perhaps the most iconic pair of Looney Tunes characters are the Road Runner and Wile E. Coyote.  There was an endless assortment of gadgets and traps that the coyote used to capture the Road Runner, but none of them worked!  I can’t remember one occasion when the ACME traps worked the way they were designed.

I often thought of Wile E. Coyote ACME dynamite traps when I watched warriors disarm roadside bombs in Iraq and Afghanistan. There was nothing comical about these brave men and women placing their own lives at risk to disarm explosives before they killed their comrades.

I often prayed that I wouldn’t see a real human being flung through the air like Wile E. Coyote while these brave men and women disarmed bombs in combat. That’s why I called the Engineers and Explosive Ordinance Detachment (EOD) some of the most courageous warriors on the battlefield.

Eric Herrera disarmed 126 roadside bombs in Iraq. He’s the epitome of courage. Here are three levels of courage that I want to recognize with this article.

Eric didn’t have to join the military. There was no draft when he enlisted. No one forced him to sign up at a time when the US was at war. It takes courage just to be willing to serve. That’s why I always thank warriors when I meet them or see them in the community.

I want you to follow Eric’s example if you’re facing challenges right now. The first step to becoming unbeatable is signing up when others choose to look the other way.

The courage to show up

Signing up is Step One, but showing up for a combat tour takes even more courage. Eric showed up when others didn’t. Not all members of the US military actually deploy to combat. In fact, in the 20 years of persistent combat in Afghanistan and Iraq, a significant portion of the US military did not serve in a combat zone at all. It takes courage to be willing to serve the country. It takes far more courage to show up to the fight.

The second step to becoming unbeatable when you’re facing challenges is to actually show up in the midst of the difficulties. Maybe you’re facing a financial or a family problem right now. It’s easy to disengage and be half-hearted with your problems. Showing up means giving your best efforts even in challenging circumstances.

The courage to stand up

This brings me to the final and perhaps most courageous part of Eric’s role in combat. Not only did he sign up for the military and show up in combat, but he was also the guy who stood up and walked forward when every other warrior was walking away from those roadside bombs.

For those of you who have never been next to an explosive that didn’t detonate, it is an unnerving situation. You can never be entirely certain that the explosive device won’t go off right in front of your face. It’s hard to keep a steady hand when you’re disarming a bomb that might end your life instantly.

Eric displayed this incredible courage on the battlefield more than 100 times. What could cause someone to continually place his or her life in jeopardy in circumstances like this? The only answer that I know is a deep love for your brothers and sisters in arms.

Like Eric, if you’re going to be unbeatable, you must sign up and be willing to confront those difficulties. You must show up even in very scary situations. And ultimately, you must stand up and confront those challenges face to face.

Listen to the whole interview with Eric HERE.