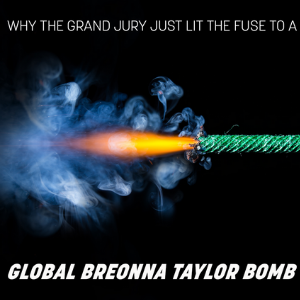 I want to start by saying that I am not a lawyer and don’t claim to be an expert in the law or the justice system. I also want to go on record as saying I hate talking about current news events. There are many more important things to give my attention to than the latest cable news headlines.

However, this is one of those few instances when I feel like I must speak out about the conditions in our country right now.

As a warrior, I regularly think about the national security of our country. I believe our biggest threat right now is not from a foreign enemy, but from what’s happening within our own borders. I believe anyone concerned about the future of the United States should pay close attention to this grand jury.

The decisions that come out of this court will have implications all over America. Last night, as a result of the grand jury’s decision, there were outbursts and protests in Atlanta, New York, Philadelphia and Washington DC. No doubt, many more cities will join the protests this week.  Therefore, this is not a Louisville, KY problem; this is a national problem which deserves national attention.

As a pastor and church leader, my even greater concern is for the glory of God and the good of his people. Justice is a character trait of God. When God created the universe, he placed his fingerprints on that creation. Therefore, God created a world that was supposed to be just and fair.

When humans destroyed God’s perfect creation through sin, justice was immediately impacted. Ever since humans committed the first sin, God has stepped back into the created order as the mediator of justice. Justice was a part of his original creation. Humans were created to be perfectly just and absolutely fair in their dealings with one another. This is a benefit of humans being created in God’s image and being imbued with his character and nature.

Setting the conditions for mass outrage

When our judicial system treats the innocent or guilty unfairly, we naturally feel anger.  This anger is not just tied to the judicial system; it actually is a part of the character and nature of God at work inside of all humans.

Just like God gets angry over the abuse of the innocent or minimizing the guilty, we too should get angry when our judicial system fails to deliver justice.

This is the backdrop that the grand jury should have considered before rendering their indictment verdict of 3 police officers involved in the killing of Breonna Taylor. I don’t understand why this grand jury wouldn’t recognize the implications of its decision.

If you’re wondering why there are protests in Atlanta, New York City and Philadelphia, it’s because all human beings have this innate sense of justice. When that sense of justice has been violated, we naturally feel a sense of anger.

Sometimes that anger turns to a violent retaliation for injustice, and this is the time bomb that the grand jury set off with the Breonna Taylor indictment this week.

And these conditions aren’t localized to Louisville, KY or the United States for that matter. Justice is a universal human responsibility. Therefore, this unjust grand jury decision sets the conditions for mass outrage in any city in the world.

The relationship between justice and peace

Did you ever stop and ask yourself why our sense of justice is so strong? Why do we feel so angry when justice is not delivered? I believe the answer to these questions lies in the relationship between peace and justice.

It is a universal human condition to want to have peace. Many societies greet each other with the word peace or end a meeting with a blessing of peace. When we experienced injustice, it immediately erodes our sense of peace. We want to live in a peaceful world, and justice is an essential ingredient in a peaceful society.

I’ve never taken part in violent protests. However, maybe it is because of this powerful desire to live in a peaceful society that people would resort to violence as a result of an unjust grand jury verdict.

Don’t misunderstand me; I am not arguing for the use of violence in retaliation for a violent event. However, I am trying to explain the sentiment that would lead people to be willing to throw rocks, damage businesses or even attack police officers who had nothing to do with this incident. It is this powerful connection between peace and justice that set off the bomb after this grand jury verdict.

What we should learn from this indictment

The most important question we should ask right now is, how do we deal appropriately with the fallout from this grand jury verdict? What does the way forward look like in our country? You don’t need to be an expert in American civil government to realize something must change!

There is a delicate relationship between peace and justice. If our judicial system doesn’t deliver justice, then we will lose peace along with their verdict.

The founding fathers believed in a truly blind judicial branch of government, meaning that no matter your social status or color of skin, you would receive fair and equitable treatment.

When a grand jury doesn’t deliver that kind of justice, it should prompt us to action. Rather than violent protests, people all over our country should stand up and speak out against an unfair and unjust judicial system.   I want my children to live in a safe and peaceful society. That kind of society is only possible if the courts convict the guilty and exonerate the innocent.