What to do when there’s weirdness between friends 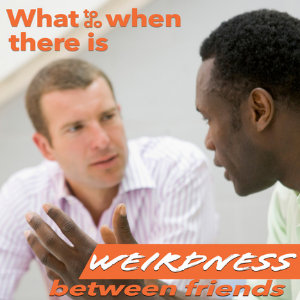 If you’re like me, you can hold on to hurt way too long.  When someone says something hurtful, I try to let it go. But, I usually end up dwelling on it much longer than I should.  When someone does something that hurts me… I can hang on to that pain for a long time.  Sound familiar?

Jesus makes a difficult demand on Christians in Matthew 18:15. [“If your brother sins against you, go tell him his fault, between you and him alone. If he listens to you, you have won your brother.”]

This short verse can be pretty tough to do when you understand what Jesus is really asking. I don’t plan to preach a sermon to you from this verse, but I would like to use it as a method to reconcile strained relationships.  I’d like to use the rest of this article to dissect this verse and its implications for when relationships are strained between friends or family.

It’s easy to rush over this little word.  However, this little 2-letter word is my biggest challenge with this verse.  Jesus starts the verse with an incident that almost all people deal with, and most of us deal with this scenario all the time- your brother sins against you.

Who hasn’t had that happen to them? Replace “brother” with “best friend” or someone you trusted, and now Jesus is describing pretty much everyone.  We all sometimes have people who sin against us by doing something or saying something hurtful.

If I was in the crowd the day that Jesus was teaching this verse, I would immediately raise my hand and ask Jesus to repeat himself.  “Did you say, GO?!?  If my brother or best friend sins against me, why should I go to him?  Isn’t he supposed to come to me?”

Apparently, Jesus isn’t as concerned about who is at fault as he is with restoring the relationship. I’ve been in this boat more than once. Here’s an embarrassing story about when I hard to learn humility in the drive thru lane at lunch.

This word implies that the other person might not know he or she hurt you. Sometimes people hurt us, and they don’t even know it. Sometimes what they said wasn’t meant to be ugly; we just understood it that way. Sometimes people unknowingly cause us pain. Explaining to somebody that they hurt us is the first step in getting that issue resolved. It’s the step that puts the problem on the forefront of the relationship.

I have talked to people in counseling who had been carrying pain with them for many years. In some cases, the people they are harboring bitterness toward don’t even know they did something wrong. In other cases, they’ve told the offending party they were hurt, and they were just waiting for an apology. I’ve seen people wait the rest of their lives for an apology that never comes.

Just because you’ve told somebody he or she has hurt you doesn’t mean that person will offer an apology. Even when the relationship has been mended, sometimes the pain remains after a deep personal wound. Some scars don’t go away overnight, and some never go away.

That’s why I wrote an article about showing grace when you’ve been wounded by a friend or colleague.

Jesus wants you to win back a friend!  -at least that’s the starting point for the rest of this passage on how to deal with hurt in relationships and sin in the church. Notice again what he wants you to win.  He’s not very interested in you winning the argument when you’ve been hurt.  He doesn’t seem preoccupied with you winning restitution when someone has offended you.

Rather, he is more interested in winning a person back.  The person who did you wrong is as valuable to Jesus as you are.  He asks you to take the initiative to win someone back who has done wrong, because Jesus knows the consequences of a person left in their sin.

Basically, Jesus doesn’t want his listeners to let anything come between brothers or best friends.

If you are reading this article today and you know there’s a problem between you and a friend or a family member, take Jesus’ advice. Don’t let any more time pass. Go to that person. Let him or her know they have hurt you. And work on the relationship. If you want some advice on how to bring healing to your relationship watch or read our recent broadcast HERE.