We’re in a fight! 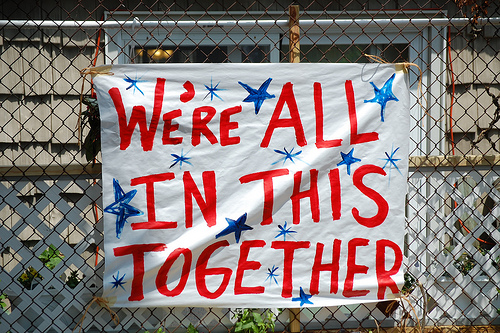 As a soldier in the United States Army, virtually every time I went to war, I was fighting a battle that I did not start. I have been sent to combat under every US president from George H.W. Bush to Barack Obama. This is the life of a warrior. Not once in my more than 15 different combat engagements did I start the battle that I was sent to fight. It was always somebody else’s decision that resulted in me getting sent to combat.

Military men and women are sent to battles they did not start. However, this is also true of spiritual warriors. Whether you know it or not, you’re in a fight that you didn’t start! If you are a man or woman of faith, you are in a spiritual battle. There are many ways that spiritual battles play out in society. I want to use this blog to describe how spiritual warfare plays out when two different cultures collide within the same social setting. In other words, let’s talk about what spiritual warfare looks like between two different races in the same society.

We are all infected with the same disease

We have all been infected with the disease of sin. There is no escaping it… Every human being on the planet has inherited sin and its consequences from our first parents – Adam and Eve. Why would I start the discussion about racial difficulties in society by talking about sin? Because at the core of all issues between individuals and groups of people is a sin problem. In fact, I’ll name the sin- pride!

It is ultimately pride that causes one person to value him or herself over another human being. It is ultimately pride that causes one person to distinguish their skin color or facial features as better than another person’s. It is pride that leads to everything broken in society. What God created in Genesis 1 was beautiful, perfect, and harmonious. By the time you get to Genesis 3 everything is affected by sin. Not only was Adam and Eve’s relationship with God affected by their sin (Genesis 3:8); all of Earth’s inhabitants were affected by this act of sin (Genesis 3:17). Even man’s relationship to the animals was severely affected by this act of pride (Genesis 3:21). But it gets worse… Much worse! Adam and Eve’s two sons were so affected by the sins of their parents, that the next sin we read about in the Bible is brother killing brother (Genesis 4:6-7)!

Do you see what the Bible is demonstrating for us in Genesis 3 and 4? The first sin, the original sin of Adam and Eve, has affected everyone and everything in creation. The effects of that first sin are still felt today. Every human being on the planet has been infected with the disease of sin. The pride of Adam and Eve continues today between brothers when we let color of skin or cultural differences ruin the harmony between two members of the same human race.

We all can be rescued at the same time

It probably feels very unfair for you to be held responsible for a fight that you didn’t start, just like it feels very unfair for a warrior to be shot at for a decision they didn’t make. If that’s how you feel right now, I totally understand! However, let me remind you, that there is a positive side of this discussion today.

Because of Adam and Eve’s actions, all of us were plunged into sin (Romans 5:12). At the same time, because of one man’s actions, all of us can be rescued (Romans 5:17). God orchestrated the history of humanity in such a way that one man’s sins affected us all. He created the system in this way so that one man’s actions could rescue us all. What Jesus did on the cross as payment for sins 2000 years ago still rescues people today! As a result of what Adam did in the Garden of Eden, all of us were infected with the disease of sin. As a result of what Jesus did on the cross it is possible for all who come to him in faith to be free from sin!

A way forward together

The real purpose of this blog is to show that they only way to an acceptable solution in the cultural and racial divide in America is TOGETHER. As long as personal pride continues to cause people to focus on what separates us, rather than what unites us, we’ll keep having the same argument over and over again.

Until we stop seeing this as an “us” and “them” problem and start looking at the issue as a “we” problem, a wall of hostility will separate us (Ephesians 2:14). Since all of us have been infected with the disease of sin, all of us must be aware of the spiritual battle that rages around us. Even those of us who have been born again by the blood of Jesus Christ have to be on guard against our enemy (1 Peter 5:8-9). No one can afford to sit on the sidelines in this debate. There is too much at stake. As long as pride exists, the war for peace between brothers will continue (Romans 8:6). If we want a better future for our children, we must war against personal pride and prejudice today.

The post We’re in a fight! appeared first on Calvary Baptist Church.