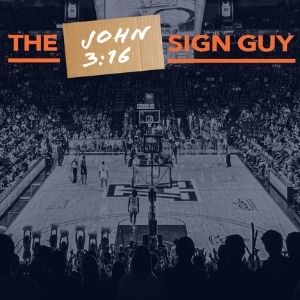 Have you ever seen the guy at the ball game holding up the ginormous John 3:16 sign? You can’t miss him. He’s right behind home plate; he’s directly behind the backboard in the playoffs. I don’t even know how he got these tickets, but he’s right in the middle of the end zone, directly between the field goal uprights.

I’m pretty sure it’s not the same guy, but I’ve seen someone holding up the same John 3:16 sign at hockey games, soccer matches, and in the crowd of the UFC!

What is it about this one verse of the Bible that makes people go out of their way like this?  What makes people miss the action for the chance to hold up the John 3:16 sign on national TV during the big game?  What is so special about this Bible verse that people would be willing to pay for expensive sports tickets just for a chance to point people to what this one verse says?

Rather than focus the rest of this article on the guy or the gal who holds up that sign, I’d like to focus on the Bible verse itself. What makes this one verse worthy of placing it on a sign for the world to see?

I’ve gotta give the John 3:16 guy credit. This guy has heart.  When everyone else is focused on the ball game, this guy is focused on something much bigger and much more important. He is concerned with eternity more than the outcome of the ball game.

When I say this guy has heart, I’m referring to a genuine faith that resides in his heart. The Johns 3:16 guy has a faith that is so satisfying, he wants everyone else to have that kind of faith, as well. Clearly, this is more than just head knowledge; this guy really believes what the Bible says in John 3:16.

You picked the right verse

Have you ever wondered why people hold this verse up on a sign at sporting events? What is it about this one verse that makes it stand apart from all of the other great verses in the Bible?

If you are going to pick one verse to share with people who have no concept of the Bible and no relationship with the Lord Jesus Christ, John 3:16 is the best single verse to share. It has the entire gospel in one succinct Bible verse. It is the essence of the Christian faith in one verse. Here it is:

For God loved the world in this way: He gave his one and only Son, so that everyone who believes in him will not perish but have eternal life.

If you are not in the habit of memorizing the Bible, I want to challenge you to start with John 3:16. This verse is so important that if you don’t know any other Bible verses, this verse tells you what you need to know to have your sins forgiven and how to have an eternal relationship with God–all in one verse!

It’s for everyone in the audience

The final reason why I think this is the perfect Bible verse to hold up on a sign at a major sporting event is because this verse declares that the Gospel of the Lord Jesus Christ is for everyone. The language of this verse means that anyone in the stadium can settle eternity through a relationship with Jesus Christ. This verse, when it is broadcast around the world for people to see, applies to everyone in any country.

The words of John 3:16 demonstrate just how universal God’s love is for people.  Sometimes this Bible verse can become so commonplace that it loses its significance. Therefore, I will often recommend that people substitute the universal pronouns for their own personal name.

I want them to know that they are part of the world to whom this verse was written. To drive the global significance of this verse home, I want to end this article today with a video. Please check this video out; it will take you less than one minute.