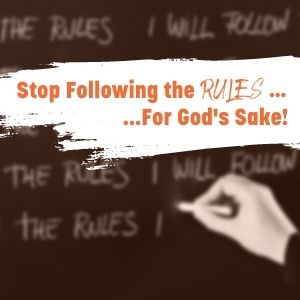 It’s a secret because many religious leaders do this all the time, but they don’t want you to question the rules.  Religious leaders create rules to force you to fit into their mold.  These man-made rules are an attempt to conform you by controlling your actions.

Every human religion is built on the same simple concept: Follow the rules, and your deity will love you and give you good gifts. If you critically examine what all human religions ask of their adherents, the answer is the same…. “Be a good boy or girl by following the rules.”

Religious leaders set rules as an attempt to impose their will on their followers, and they can sometimes enforce their rules like a parent forcing his or her will over a child.

There’s a tragic example of this very attempt at control in John chapter 5 of the Bible. This passage begins with a beautiful description of Jesus healing a man who had been disabled for 38 years.  I believe the Bible is specific about how long this man has been disabled to set up the confrontation between Jesus and the religious leaders immediately after this miracle.

This disabled man has been lying in the same place longing for healing for so long that all the religious leaders would be familiar with his medical condition before this miracle.

In John 5:10, rather than celebrate with this man because of the miracle he’s just experienced, they scold him for breaking their religious rules about walking with his mat [...and so the Jews said to the man who had been healed, “This is the Sabbath. The law prohibits you from picking up your mat”].

Only an unquenchable desire to control the population could cause these religious leaders to miss the fact that a crippled man has just been miraculously healed.

I’ve given a lot of thought to why people are so quick to latch onto the religious rules. Why do we tend to be people who naturally gravitate toward rules rather than a relationship with God?

Much of this is our upbringing. We have been conditioned to follow the rules of parents, teachers, and adults throughout our childhood.  Almost everyone has grown up in an environment that has taught them that being a good boy or girl means following the rules.

There’s nothing bad about these rules.  I still think you should eat your vegetables and look both ways before crossing the street.  However, when you carry the reason for following rules into adulthood, it can have a significant impact on your faith.

There’s a dangerous line that people often cross when they become fixated on following a set of religious rules.  It’s the line of adultery.

Church leaders often take on the role of God over their followers by setting a bunch of religious rules.  These endless lists of Do’s and Don’ts can quickly become a shallow substitute for a relationship with God.

I don’t write this article today out of rebellion for religious rules.  Something much more important is at stake in this article… your soul!  Putting effort into following the religious rule often diverts people’s attention from the sacrifice made on their behalf by Jesus Christ on the cross.

There is a dangerous, imaginary boundary that men and women cross every time they focus on following a set of religious rules rather than pursuing a relationship with the Creator.  Transgressing this boundary exchanges the blood sacrifice of the Son of God for obedience to a set of commands.

The religious leaders in the Bible couldn’t recognize the Son of God standing in their midst- even after he performed this miracle- because they were clouded by an obsession for their rules.

Jesus’s brutal death on the cross and his bodily sacrifice on your behalf shatters the myth that any attempt to follow a set of religious rules can earn someone favor with God.  Even if you could perfectly follow a set of religious rules for your entire life (which no one has ever been able to do except the Lord Jesus Christ), this still couldn’t erase your sin. There is no amount of human effort that can earn your own righteousness with God.

I want to conclude with a personal challenge: Put the religious rules back in their proper place in your life.  I am not asking you to ignore religious rules. My challenge is that you place your hope in Jesus’s sacrifice on your behalf rather than following a set of religious rules.

They are simply a set of guidelines to help you avoid some painful mistakes in life. Don’t ever place your ultimate hope in following the rules. This can never earn you God’s love. It simply doesn’t work that way!

If you have realized for the first time in your life that you have hoped in a set of religious rules rather than the blood sacrifice of Jesus Christ, I want to offer you a chance to trust him as Savior for the first time.  Pray this simple prayer if you’re desperate for Jesus to save you from your own selfish desire to earn God’s approval:

God, I believe that you are my Father and that only you are worthy to set the rules for my life.  I admit that I’ve been trying to earn your love by being a good person.  I realize today that my good deeds can’t erase my sin, and I believe that you sent your Son, Jesus, to the cross to rescue me from my sin.  Today, I turn from my human attempt to please you and trust only in the death and resurrection of Jesus for my righteousness. Please forgive me, clean me up, and help me to follow you from this point forward.  Amen.

If you’ve just said that prayer, if it was sincere and you trusted Jesus alone for your salvation, I’d love to know about it.  Please email me at: info@2citieschurch.com.