Scary like a gun fight: 5 things I learned about prayer 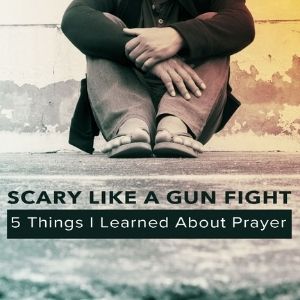 My pulse was racing, my head was sweating, and my throat was starting to get dry… and it had nothing to do with the summer temperatures in South Georgia. I still remember being scared in this very harmless situation. My physical reaction on the street corner of my hometown both surprised and disappointed me.

Although I was a battle-hardened U.S. Army Ranger with combat experience, I was displaying signs of fear like my first firefight in war. Needless to say, I have had the world’s greatest military training on how to deal with fear. However, I didn’t expect this fear.

My physical reaction to this simple situation surprised me.  What could I possible face on the city streets of Columbus, Georgia, that would cause this kind of fear?

Praying for a stranger publicly for the first time!

I still remember the circumstances of this day vividly; I can recall exactly where I was when this took place, and I still vividly remember how terrifying this felt for me. A stranger came up to me on the street corner who was obviously going through some hard times and in need of a meal.

As he was walking down the street, I felt this overwhelming sense from the Lord that I should go and pray for him. This started a bit of a civil war inside my soul. Right there on that street corner, I felt the Holy Spirit prompting me to go offer a prayer over this man who was in great need. However, at this point I had never prayed for somebody else publicly. So, I started wrestling with God about praying for this man.

God, the man is hungry. He asked for some money. I gave him what he asked for. He didn’t ask for prayer. Why are you prompting me to go pray for this man? -was my argument with God at that moment. I lost that argument with God, because I felt this overwhelming sense that the man needed prayer.

I am certain I looked like a complete idiot as I ran down the street after this homeless man. I began calling after him: “HEY, COME BACK HERE FOR A SECOND; I WANNA TALK TO YOU!” (Thinking back on it now, I’m convinced the man probably thought I wanted my money back.)

When I finally caught up with him, I sheepishly asked him, “Can I pray for you?”

I wish you could have seen the look on his face. It was priceless the way his eyes lit up when I offered to pray for him.

“Yes! I definitely need your prayers!” he immediately replied.

Here are five things I learned during that first experience praying publicly with a stranger:

I have often thought about this moment of fear on the streets of Columbus, GA. I’ve wondered why I experienced such fear about praying for somebody for the first time.  My reaction in this circumstance has caused me to examine the nature of intercessory prayer (praying for somebody who is in need, especially praying publicly for a stranger).

Prayer, even when done in public, is always very personal. I am opening my heart up to God in front of other people when praying out loud for them. There is no way to make prayer both honest and impersonal at the same time.  When you offer to pray for somebody, you are giving him or her a little bit of yourself in that prayer

Because prayer is personal, it also makes the one doing the praying vulnerable. There is a moment when I open my soul up to God when praying with someone else.  Any time I open myself up to someone else, I become vulnerable. Prayer makes me vulnerable before God and the one with whom I am praying.

This kind of vulnerability is not a bad thing; we need to become open and honest with other people on occasion. This honesty allows us to pray sincere prayers from the heart. If you struggle with the ability to be vulnerable with somebody else, here is some advice about how to be honest without giving TMI (too much information) .

Prayer is a spiritual work. It is not hard, physical labor… but it is work nonetheless. Prayer is how Christian people do spiritual battle against the forces of darkness. Prayer is similar to exercising muscles in the gym. You have to do hard work with the muscle in order for it to grow stronger.

One of the things that makes prayer spiritual labor is the warfare that happens because of our words. Intercessory prayer is when one person brings the struggles or needs of another to the Heavenly Father.  This means, there is both a physical aspect of prayer (the words coming out of your mouth and in this case, the sweat on my forehead) and a spiritual aspect of prayer.

There is something happening both in the physical world, as well as in the spiritual world when God’s people pray sincerely from the heart.

Here’s an article that I wrote for people who don’t really understand what spiritual warfare is like. Check out what it looks like to win hearts and minds.

When you pray for someone in need, you are actually following in the footsteps of Jesus. Isaiah 53:12 says that Jesus intercedes for rebels. That word intercedes there means praying for his enemies.

In Romans 8:26, the Bible clearly says that the Holy Spirit is currently interceding on behalf of God’s people when we don’t know what to pray. Hebrews 7:25 says that Jesus is always interceding for those who have come to him in faith!

I want to become more like my Jesus.  Therefore, I am becoming more comfortable with the idea of interceding for other people.  The first time that I prayed for a stranger was terrifying, but the experience taught me some valuable lessons.

That first public prayer set me on a path to becoming more comfortable praying for others in need. Now I feel like I can pray for just about anyone on any occasion… But it didn’t start out that way! It started off by me experiencing the real fear of praying for this total stranger.

If you are not in the habit of praying for other people, it will probably be scary for you, as well. Don’t let the fear hold you back from following in the footsteps of Jesus and interceding for others in need.