Remembering 9-11: What 19 years of war has taught mankind 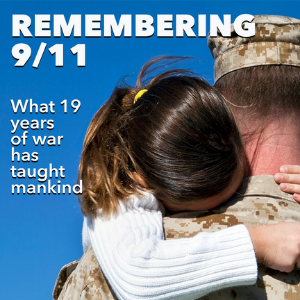 “Where were you when…?” Almost every adult in the US and many people around the world remember where they were when planes flew into the World Trade Center in New York City and the Pentagon building in Washington, D.C. Do you remember exactly where you were when you heard the news of the attacks on September 11, 2001?

Even if you didn’t know people involved in the attacks, this event was seared into the minds and memories of many people around the world because this one morning ushered in an age of global terrorism.

Today we remember the 19th anniversary of these attacks. However, this article is not meant to be a memorial to the men and women killed in the attacks, nor to the warriors who gave their lives fighting the Global War on Terrorism. Rather, this article is designed to remind readers of a few lessons that the world has learned in the past 19 years. Or, I should say, the world ought to have learned in the last 19 years.

Cursed is the country that fails to learn its lessons from hardship and suffering.

Nothing should change a nation more than war, because nothing else brings on suffering and grief like combat. Therefore, when one generation has been at war for 19 years, this generation should have the courage to build a new future for its children in the hopes that its sons and daughters never have to experience 2 decades of war.

With the remaining paragraphs of this short article, I just want to put forth a couple of plain lessons that 19 years of war has taught humanity. There are 50 more profound lessons this global age of terrorism has taught us, but I have selected these five because they are close to my heart.

Some things are worth fighting for

Before the attacks on September 11th, some people gave the impression that war was simply unnecessary and untenable under in any circumstances. These quasi-pacifists talked like there would never be any conditions worthy of war.

Interestingly, many of those people suddenly changed their tune on the morning of September 12th. This unprecedented level of terrorism against the innocent shattered many pacifist ideologies.

War has taught us that some things are worth fighting for. The protection of the innocent is a value worth giving your life for, and therefore, worth taking another life for. A violent assault on our way of life requires a violent reaction.

There was a popular sentiment in the late 1990s that the United States military technology was so advanced that it could win a war on its own.

There’s no question that the United States has some of the most advanced military technology on the planet, and I am not arguing against technology. I am for using any and all technology that would give warriors fighting for a just cause the advantage on the battlefield. However, I am arguing that technology by itself cannot win a war!

After 19 years of combat with some of the world’s most advanced technology, I don’t know anyone today who still believes that technology alone can win a war. Only a moron or a technology company trying to earn a defense contract would argue this in 2020.

Wars are fought and won by warriors. It is only through men and women with the sheer will to win, a love of country, and a willingness to sacrifice that a nation can achieve victory in combat. Technology can help brave warriors win on the battlefield, but it cannot achieve victory alone.

I am convinced that we didn’t give military families enough credit before the Global War on Terrorism. Many people took the military family for granted and only considered warriors necessary to their nation’s defense. Now, after 19 years of persistent combat, the United States has learned just how invaluable the military family is to national security.

I have watched families suffer immensely so that warriors could be successful on the battlefield. I have seen spouses hang on to one another at the funeral of a loved one. I have seen the pain and the longing in the eyes of children as a parent goes off to war and misses many special occasions.

Everyone knows that bullets and bombs leave scars. However, most of us don’t consider the serious psychological, emotional, and spiritual wounds that combat also creates.  War leaves scars both in the flesh and on the inside, as well.

If you want some examples of the scars that war leaves on the heart and soul of a warrior, look at the suicide rate in the US military right now. Or examine the divorce rate, substance abuse rate and percentage of homelessness among combat veterans compared to the rest of the population. There you will see some of the internal wounds that war creates.

I believe a nation has a lifelong obligation to its warriors. Just like bullets and bombs can leave lasting scars in the flesh, these brave men and women will sometimes carry internal scars to their grave.

This article has listed a number of terrible consequences that war engenders. However, I want to conclude on a positive note. 19 years of persistent war has taught the United States a vivid lesson about the power of hope.  After all, what else would keep men and women fighting for an entire generation? They don’t do it for medals of valor, nor for glory. Rather, there is a hope inside of them for a better future.

If you do nothing else after reading this article, would you thank a warrior today? Perhaps you know somebody who was involved in the Global War on Terrorism or is still in the military fighting for the future. Would you reach out to him or her and offer a simple thank you today?  If you have some connection with a military family, would you thank them also for the sacrifices they have made for our future freedom? After 19 years of persistent combat, this is the least we can do!