by Jeff Struecker11 months ago 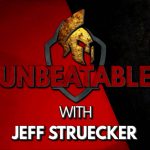 Jeff first talks about the meaning behind the name Unbeatable and gives his top 5 reasons why the world needs another podcast.

His first guest, Veteran Army Ranger Keni Thomas, describes what it was like to go from combat, serving in Black Hawk Down, to working his way to performing with some of the top country music names in Nashville.

–what drew Keni to the stage

–his advice for pursuing your dreams

–some of his career hi-lights

Keni is also a motivational speaker and has been recognized by congress, the White House, and was recently inducted into the VFW for his work on behalf of veterans and military families. Find him at: https://kenithomas.com/

Jeff is a member of the US Army Ranger Hall of Fame. He served most of his military career with the Army Rangers and won the Best Ranger Competition as a Sergeant. In almost 23 years in the Army, Jeff served 17 combat deployments in 5 different US wars including Black Hawk Down. He holds a PhD, as well as many other earned and honorary degrees. He has taught leadership at every level from undergraduate to PhD. He is an award-winning author with six books in print. His military thrillers and life story are in constant demand.

Catch behind the scenes and more over at:

Do you need a speaker for your next event?