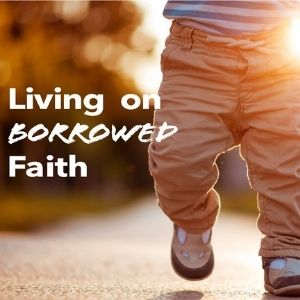 “Tag me in your prayer!” was the desperate plea of a Ranger to his buddy as they prepared to leave their firebase for a dangerous mission.

I love this guy’s request for two reasons: 1) This guy had absolutely no idea how to talk in spiritual language. Therefore, he used social media terms to talk about prayer. 2) This Ranger realized that this dangerous mission might be his last, which prompted him to lean on the faith of his Ranger buddy.

In other words, he was trying to borrow his buddy’s faith.

Over the past couple of weeks, my thoughts returned to this question: Can the strength of another’s faith make a difference in your life?  Basically, I’m trying to determine whether or not you can live on borrowed faith.

Boring, right?!?! This may seem like a highly theoretical and theological concept that makes no difference in your life. But don’t tune me out just yet, because I’m convinced that people borrow other people’s faith all the time.

We tend to believe what our parents told us to believe, not because we have done the research ourselves, but simply because we were told to believe it. There are millions of religious leaders all over the world who make their living telling other people what to believe.  After much thought and study about borrowed faith, I’ve come to this conclusion:

You can lean on others’ faith briefly, but you can’t live on it!

I don’t believe there’s anything wrong with looking to somebody else who has a rock-solid faith at certain pivotal points in your life. In fact, sometimes another’s faith comforts and strengthens you during difficult moments.

As I read the New Testament stories of Jesus’s disciples, it’s obvious that they borrowed Jesus’s faith for most of the time that he was with them on earth. However, when Jesus left and returned to Heaven, he sent his Holy Spirit to be with them and to guide them.

From this point forward in the Bible, the disciples had to lean on the Holy Spirit and develop their own faith.

The natural progression of your faith is like children learning to walk. First, they pull their body weight up by holding onto a fixed object. Then they’re able to take a few steps forward holding on to their mother or father’s hands. Eventually, their legs get stronger, and they become confident enough to take their first steps on their own.

This Ranger was asking his buddy to help him take his first spiritual steps of faith before a dangerous combat mission.

God sometimes sends a person of solid faith at critical times in your life to help you get over the hurdles you’re facing.  Thank God for sending people like this! Lean heavily on their faith during these moments.

However, don’t forget that you can’t live on their faith forever. Like a child learning to walk, you will eventually need to learn to stand on your own faith, not on the faith of others.

I have three challenges for you as I conclude this article:

1.First, find someone in your life who has a solid faith that you can lean on.  Is there a person you can ask to “tag you with their prayers”, because you know their prayers are so strong and their faith is so solid?  If not, ask God to bring a person like this in your life.

2. My second challenge for those who are living by someone else’s faith is, now is the time for you to figure out what you believe and why you believe it. By doing this, your faith will become strong enough to live on.

3. Third and finally, if you have this kind of solid faith that helps you stand during the difficult times, find a new believer with a weaker faith, come alongside him or her, and let that person lean or your faith when times get difficult.