I’m Voting for a King

If this statement doesn’t make any sense to you that’s because it’s a paradox. How can you have a kingdom and still exercise the right to vote? Don’t these two things naturally oppose each other? Well, yes and no. In a kingdom you don’t get the right to vote. In a republic you exercise your right to select the leaders of your government.   In terms of a governmental system you can’t have both a kingdom and a vote.   Yet, the Bible tells us we live in both.

Don’t hope in your government 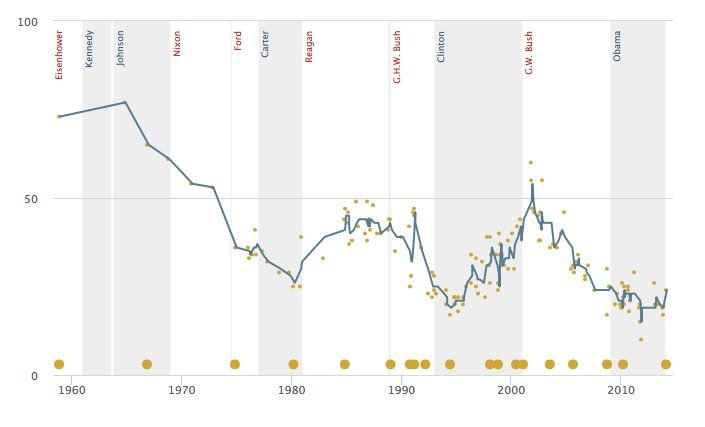 This chart by the Pew Research Group shows you the staggering decline in trust in the government over the last 50 years.(1)  Maybe people in the USA realize that fallible men and women are going to make mistakes. Maybe we realized that there are no perfect people therefore there are no perfect governments. I would hope this statistic would cause people to turn from a government and put their hope in a kingdom – the Kingdom of God.

You live in a kingdom

Jesus left his kingdom in Heaven when he came to Earth (John 18:36).  The king became like one of his subjects. That means if you live in the United States and are also a follower of Jesus Christ, you live in his kingdom a kingdom that we will inherit fully when we’re with Jesus in heaven. This is the kingdom that Jesus talks about in Luke 22:28-30.

It gets really hard to remember you live in the kingdom of God when we’re surrounded by this broken government.    May I remind you, don’t look to the government to solve your problems. You live for the kingdom.  Therefore, you should cast your cares on Jesus and let your King deal with them (1 Peter 5:6-7).

Which puts Jesus’s followers in the same dilemma that Jesus found himself in… How do I honor the government and follow my King at the same time? There are no easy answers to this question. We live in the midst of this tension- honor of the government and honor King Jesus.   Sometimes, those two things are going to be in contradiction to each other. Sometimes, they put us in a position where we have to make some difficult choices.  If you find yourself in that situation right now… always default to following King Jesus, even if that means dishonoring your government.

This year is an election year.  I hope you take your privilege to vote as sacred as I do. I hope that you have already registered. I hope that you will go to the polls this year.   But I also hope you will remember the responsibility to honor your government while at the same time following your King.