How to disagree with a professor without getting an “F” 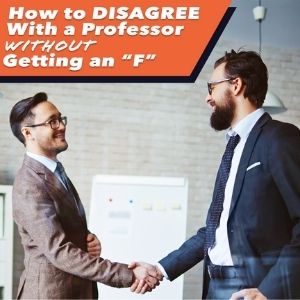 I have the privilege of teaching some pretty amazing students each semester at Southeastern Baptist Theological Seminary. This school, like any good organization, is continually trying to improve.

A big part of their improvement process is through course evaluations. Every professor gets real, honest feedback from nearly all of his or her students every semester.  Some of that feedback is affirming; some of it hurts. But, no matter how pleasant or painful the feedback may feel, I know that it is given by students who want me and the school to improve.

Unfortunately, I get that helpful feedback in those evaluations about how to improve after it has ended. I often wish I got it at the beginning or in the middle of the course. That way, I could put some of those ideas into practice before the course was over. Because I want to do my best for every group of students, it often feels frustrating to hear how I could do better for the next class.

I’ve been around enough college professors to know that some take feedback graciously, while others get their feelings hurt really easily. This article today is designed to help you give honest feedback to a professor without failing the course.

Let these three general principles guide you any time you are going to disagree with a leader:

Disagreement can cause friction. Some people can’t accept disagreement because they have no stomach for conflict. Some leaders have a fragile ego and take all disagreement as disloyalty.  Therefore, always begin the disagreement by erring on the side of grace.

Even if you are totally in the right and your boss or professor is completely wrong,  begin the conversation with grace.

If you’ve ever seen the classic Disney film Mary Poppins, you’ll remember that famous song that says, “A spoonful of sugar helps the medicine go down.” This is an excellent guiding principle about how to start the conversation with someone you adamantly disagree with.

Mary Poppins understood how to prepare for a hard truth. Many people view criticism, even constructive criticism, as unpalatable. Therefore, starting the conversation with grace is like a spoonful of sugar before giving someone the medicine of your honest feedback.

Because some people are so averse to conflict, they shut down as soon as a disagreement begins. I understand where this sentiment comes from. No one enjoys conflict. However, the tragedy in this approach is, you never get the opportunity to grow that some conflict can bring.

If you are the kind of person that always runs away from conflict, you will miss some growth that only painful lessons can teach you.

Being gracious does not mean that you have to be a pushover. When you disagree, it’s OK to dig your heels in and stand your ground.  Why would anyone subject themselves to the emotional challenges of conflict unless there was something worth fighting over? The person who is unwilling to deal with conflict, at the most basic level, lives like there is nothing worthy of fighting for.

One of the best examples of this recorded in the Bible is the way that Jesus dealt with the religious leaders. In fact, he was so firm with them that many of his disciples were shocked by his interaction with them.

In John chapter 3, Jesus has a theological disagreement with a prominent pharisee Named Nicodemus.  This religious leader had dedicated his life to understanding the Bible. Therefore, when he comes to Jesus with a question, he gets an unexpected answer.

Nicodemus would be the equivalent of a Bible professor in New Testament times. In John 3:4, Nicodemus is confused by Jesus’s teachings. By the time you get to John 3:9, Nicodemus just struggles to believe what he’s hearing. Nicodemus, the teacher, had never had someone teach him about being born again. This concept was really challenging to him, and therefore, Jesus uses a familiar Bible story to illustrate his point.

If you want to see what it looks like to be both firm and gracious at the same time, look no further than the way that Jesus deals with Nicodemus in John 3:18. There is no room for ambiguity in this one simple statement about the necessity of being born again.

Nicodemus could have left this conversation frustrated and angry at this theological conflict with Jesus.  That’s exactly what happens with the other religious leaders when they are challenged by Jesus in the book of John.

Maybe Nicodemus did go home and sulk for a little while. Perhaps it took him weeks to think through what Jesus was saying. However, it appears that Nicodemus didn’t remain upset. At some point, he reconciled with Jesus.

The next time John talks about Nicodemus, he’s challenging the other religious leaders about their interpretation of the law in John 7:50 (presumably, to save Jesus’s life). The last time that we meet Nicodemus in this Bible book, he is helping give Jesus the burial that a king deserves in John 19:39. There is no question, that at some point, Nicodemus reconciled with Jesus.

This guy is a case study in how to receive a rebuke. Jesus’s interaction with Nicodemus is the perfect example of how to disagree with somebody.  Of course, we must keep in mind that Jesus is really the teacher, and Nicodemus is the student in this story. However, that’s not the way they were recognized in society at this time.

If you know you need to have hard words with somebody, let this article today be your guide. If you adamantly disagree with a boss, teacher or your spouse, being gracious and firm at the same time are your best chance for being reconciled after the argument.