Hearing a hard answer from God 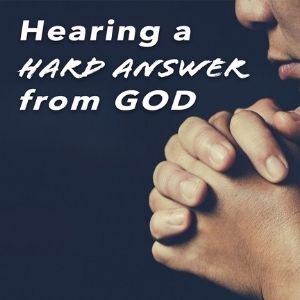 How well can you tune out the other voices around you and focus in on the voice of God? Is this something that you do easily or naturally?

I have a lot of voices screaming for my attention.  As a result, I have to put a lot of focus into hearing the voice of God. By the way, when I say “voice of God”, I am not suggesting that I heard an audible voice. I have never heard an audible voice from God. However, I have had moments in my life when I was absolutely certain that the Holy Spirit of the living God was speaking to my heart.

There was a moment in my military career when I was really straining to hear the voice of God.  I was struggling with a pivotal moment in my future, and I really needed the Lord’s direction.  What I heard, however, was not the answer I wanted.  Here’s what I learned through this experience.

Listening with both ears

Have you ever driven to work in the morning frustrated and confused about where your career is and the direction that it’s headed? This is the situation I found myself in for more than a year while serving as a sergeant in the United States Army’s Ranger Regiment.

I loved my experiences in the army; it was something that I cherished. However, there was a moment in my military career when I started to experience a sense of restlessness. I couldn’t put my finger on why I wasn’t being fulfilled at work.

This is the same job that I had been in for years, and I absolutely loved what I was doing. However, I had gotten to the point where I was no longer feeling satisfied with the direction of my military career.

What made this experience even more difficult, is that I could not put my finger on exactly why I wasn’t feeling satisfied. For more than one year, I drove to work early in the morning, with an unexplainable, general feeling of restlessness inside my heart. As this feeling of restlessness grew stronger, so did my need to know what God wanted me to do next in the military.

I don’t have words to describe the painful conversations that I had in my truck early in the morning while driving into work. This continuous longing to know what to do next in my military career caused me great frustration.

I prayed hard.  I searched the Scriptures.  I talked with friends listening for the voice of God… and heard NOTHING!

Warning: If you’ve ever been in a situation like this, you know how dangerous these moments of silence from God can be. The longer I wished to hear from God and the more I pursued his voice without hearing anything, the more I became vulnerable to outside voices telling me what I wanted to hear.

If you’re going through a situation like that right now, I want to give you some advice.  Here’s an article I wrote about having ears to hear from God.

Hearing the answer, but not the one you want

I was ready for God to move me to a different phase of life. I was ready for the next step of my military career. I was praying, waiting, longing to hear from God… and hearing nothing.  This moment was not only challenging professionally, but it was also challenging spiritually. My faith was tested as I waited and listened for God.

I started to wonder if he heard my prayers. I began to wonder if he was willing to show me what he wanted me to do next. This year should have been one of the greatest in my career.  Instead, it became a brutal challenge for me about my future.

Have you been there?

One night, kneeling by my bed after a long day at work, I felt the Lord give me the answer I was asking for.  Here’s what is fascinating now that I’m looking back on this moment (although it was totally frustrating at the time): There was nothing special about this day.

Nothing significant happened that day compared to the hundreds of other days and nights that I spent seeking God’s will. This night, apparently God was ready to answer my prayer. But, he didn’t give me the answer I wanted to hear!

When God finally spoke to me, his answer was not where… but wait! I felt an overwhelming sense that God wanted me to remain where I was and continue doing the same job until he was ready to move me.

I remember the moment of prayer beside my bed that night as a test of faith.  If you’re struggling with surrendering an area of your life to God’s will like I was my military career that night, here’s an article about unconditional surrender that might help you.

Sometimes when you hear an answer you don’t like, it makes you want to stop listening.  An uncomfortable truth can make listening to lies tempting.  However, just because the voice your hearing isn’t pleasant, doesn’t mean you should stop listening.  I committed in prayer that night and to obey.  If God wanted me to stay where I was, as frustrating as that was to hear, I committed to wait until God was ready to move me somewhere else.

The next morning my drive into work was different. I had the peace of knowing that I had heard from God and was being obedient. My job didn’t change; my circumstances were the same. However, I was at peace knowing that God wanted me to stay exactly where I was at that moment.

You can’t put a price tag on peace. I could have easily followed my own selfish desires. I could have sought a new job situation even though I knew God wanted me to remain where I was. I learned a powerful lesson during this long, painful point in my army career about the value of listen for God’s voice and obeying when you hear it.

Let me give you the rest of the story.

I waited for an additional year in this job before the Lord made it clear that he was ready to move me. In one business day, more than a year after hearing God say to wait, I landed the perfect job, and my career took a totally different turn.  The events of that day were so spectacular and happened so suddenly that I was certain God was orchestrating them.

If I had not listened and waited for God, I would not have been in a position where all of those circumstances could happen in one day. God was truly at work behind the scenes the whole time, and I just didn’t realize it until this one moment when everything changed for me.

The peace that I experienced after hearing from God has been a powerful reminder for me. When life starts to get difficult and I’m asking God for his guidance, I think back to that year of waiting. I remember the peace of knowing that I have heard from God, even if it wasn’t the answer I was looking for.

If you’ve ever heard the voice of God speaking to your heart, even if it’s an uncomfortable message, you will long hear that voice again. That’s why I prepared this recent message about listening to the small, still voice of God.

Read more about Jeff’s Army career in his book.