Grace in the form of a grey beard 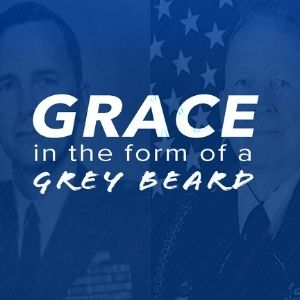 When I was a young staff sergeant in the US Army, I met an older gentleman who changed my life.

At this point in my career as an Army Ranger, I was a nobody.  To this day, I’m not sure what caused him to take an interest in me, but I knew of this man quite well.  In fact, everyone I worked with knew of Colonel (Retired) Ralph Puckett.  He was a living legend among the men of my unit.

Rangers used the phrase “grey beard” to refer to seasoned veterans who are still helping to influence the next generation of warriors.  Colonel Puckett was the most highly-esteemed “grey beard” I’ve ever known. (By the way, you don’t need to have facial hair to be considered a grey beard.)

His combat leadership in both Korea and Viet Nam made him one of the most decorated soldiers in the history of the US Army, and he has been inducted into just about every military Hall of Fame for which he served.

There is a prominent display about him in the United State National Infantry Museum.  (Considering some of the US Army infantrymen who went on to be captains of industry or leaders of the nation, it is unheard of that one solider would have this much attention directed toward him at this national museum.)

One day, while doing my job and preparing warriors for combat, I got a message to report to the office because someone wanted to meet with me.  That was the day that Colonel Puckett initiated a relationship with me that has lasted over 25 years.

There are a lot of kind words that I could use to describe this man who became like a grandfather to me. However, the one word that describes this man more than any other is “gracious”.  Colonel Puckett was gracious to me for reasons that I still don’t understand.

Grace in the Bible

There’s an interesting phrase in the Bible about grace.  In fact, when I read this story in the Bible, I immediately think of Colonel Puckett. He embodies this kind of grace to me. The Bible describes how “great grace was on” all Jesus’s followers in Acts 4:33.[1]

When I read this verse for the first time, it seemed odd that the Bible would use the phrase “grace…on” them.  That’s not how we use the word grace most of the time in the English language.

It would be grammatically correct to say or “grace toward”, or “grace in” someone, but “grace on” is very unusual.  That’s what made me do a little research to figure out exactly what it means when there is “great grace on” someone.  Here’s what I learned.

The Bible word grace, at its most basic definition, means receiving something that you don’t deserve. Grace is displayed when someone gives you a gift that you could neither earn, nor work to repay. If you are familiar with the Bible, then you are aware that the greatest display of grace in human history is God’s favor poured out on his children, even when they are in rebellion (see Romans 5:8).

Our sin makes God’s grace seems a bit scandalous or reckless in the Bible. Sin isn’t just a minor mistake against God; it is completely missing the standard by which he expects humans to live.  I don’t have time here to go into a detail, but here’s a link to another article I wrote that compares sin with missing a target completely in marksmanship training.

Our sin deserves nothing but condemnation and punishment.  This is explicitly taught throughout the Bible.  Even if you don’t read the Bible, every parent understands the nature and consequences of sin when their children deliberately disobey the family rules.

Thus, the first and most powerful form of grace displayed is God’s grace toward people.  This is sometimes referred to as vertical grace by pastors and theologians, because it comes down to us from God. The Bible uses the word grace most often in this vertical sense, to describe God’s favor toward his children. However, there is another way that this word is used in the Bible.

The phrase “grace was on” Jesus’s followers describes the way they were viewed by other people. This is an example of horizontal grace.  You might choose to use the word favor to describe what the Bible is saying in Acts 4:33.

This Bible verse is showing how God’s vertical grace on these men and women caused horizontal grace from their friends and neighbors, as well. I believe that other people can be prompted to show horizontal favor to those who have God’s vertical favor on them.

Maybe this explains the Bible’s use of the preposition “on” in Acts 4:33.  God worked in these men and women first.  Then he worked through them to bless and serve one another.  Finally, God prompted others to show favor to these early Christians.  This is what “God’s grace on you” looks like.

Perhaps, it was God’s vertical grace that prompted Colonel Puckett to show me horizontal grace.