God, help us have a “more perfect union”! 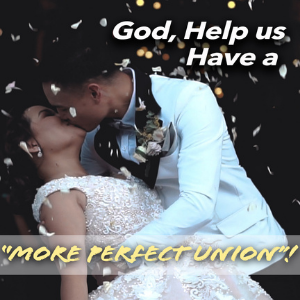 When you hear the word union, does it make you think of marriage? Does this phrase “a more perfect” cause you to think about your national government? Good.

I don’t plan to get into a deep theological discussion about what makes the marriage union special. However, I do want to explain the voluntary agreement a bridal couple is making during their marriage ceremony. There are some important parallels between a marriage relationship and the relationship between a government and its people.

The founding fathers of the United States used the phrase “a more perfect union” in the preamble to the US Constitution to describe the reason for the War for Independence. This phrase demonstrated the colonialists’ attempt to design a better form of government than what they experienced as British citizens.

Their goal was not to build the perfect union, because perfection is impossible with any human relationship.  Rather, they attempted to build a better union than what they had just left.

However, just like the efforts of the founding fathers, even though the perfect marriage is impossible, a married couple can still work towards a more perfect union.

Get the bad stuff out

Because people are inherently sinful, marriage and government are messy.  Relationship problems are part of the common human condition.  I’m not perfect, and neither are you! Therefore, it’s impossible to completely avoid mistakes and failures in human relationships.  Just because we can’t avoid making mistakes doesn’t mean that we should just give up and stop trying.

I do a lot of marriage counseling. Sometimes I get the privilege of counseling an engaged couple before their wedding day. But most of my counseling is done with couples who are experiencing severe difficulties in marriage. I would always prefer to help a couple identify and prevent a problem than try to fix the problem after it’s already done damage in the relationship.

In every case of marriage counseling, there is a degree of sin.  Our broken, sinful nature does damage to our relationship with God, with other people, and even our relationship with ourselves. The first, and most important, step in building a more perfect union is dealing with the bad stuff in the relationship. In order to do that, you must break the cycle of sin.  Here’s an honest article I wrote about dealing with this in my own life- I’m going to need a bigger hammer.

Put the good stuff in

Let’s say that you’ve done a good job of working to eliminate the sin problems in your relationship. Now the next step is to build on those successes and replace the bad stuff with some good. If you do nothing but eliminate the bad from a relationship, but don’t replace it with some good habits and practices, the changes that you worked so hard to accomplish will not last.

Jesus said that in order to really make lasting change, you have to replace the unclean spirits with the Spirit of God in Luke 11:24-26.  He makes it clear that a person is worse off in the long run if he or she only cleans out the bad stuff but doesn’t replace it with good stuff. This just creates room for more bad stuff in the future.

Lasting change in marriage comes by eliminating the problems in your relationship AND introducing some good stuff into your marriage. When you go to the polls and vote, don’t cast a ballot for one candidate just because you don’t like the other candidate.  That doesn’t make a politician worthy of your vote.

Rather, cast your ballet for the candidate that will eliminate the bad stuff AND replace it with some good stuff in government. Only when these two actions are done together can a marriage or government make progress toward a more perfect union.

This is exactly how I felt about our elections cycle 15 months ago when I wrote this article.  I feel even more strongly that these are the options voters are being offered today.

I believe the only one who can create a perfect union is the King of the universe. The God of Heaven alone has the power to change a sinful human heart.  Until you deal with the problems of the human heart, you really cannot treat the the heart of human problems.  This is true in your marriage, as well as in your government leaders.

Simply selecting a new leader will not make government better in the long run. More perfect unions require more perfect people! This is why I wrote an article about what it looks like to really serve people. Here’s my answer to this question, can you really serve someone and not meet their greatest need?

Like you, I long for a more civil form of government. I intensely desire this union in which I live to become more civil than what is portrayed on the evening news. However, I realize that only through a radical change in the human heart is this kind of civil union possible. When enough hearts have been transformed by the love of Jesus, then an almost perfect society is possible.

Until God does that kind of miracle in the human heart, helping our elected leaders make a better life for us is like expecting pears from a pine tree.  Take a moment and check out this video about why you can’t have fruit without a fruit tree.