Give away the 1st round draft pick?!? 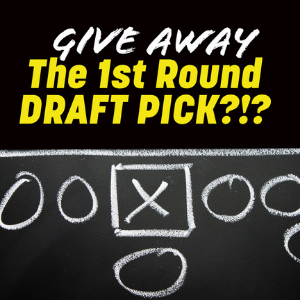 If you’re a Big-10 sports fan, you’re not watching college football this week. (Thanks a lot, COVID-19). Many people have been waiting many months for this time of year. Football fans all over the nation have been longing to see their favorite teams battle it out on the gridiron.

Even though the coronavirus has kept teams busy during the offseason trying to figure out how to practice without putting players at risk, still a lot of attention has gone into building a winning team.

Teams put a lot of thought into the strategy of how to select the best players for their organization during the draft. Everyone in football wants to have the #1 draft pick. This virtually guarantees picking the best player for your most vulnerable position. It goes without saying that how well a team does in the draft will impact how well that team plays during the season.

No team general manager would give away a first-round draft pick without getting something huge in return. This draft gamesmanship is often the difference between success or failure during the season.

What would it take for you to be willing to give up a first-round draft pick? What would you ask in exchange for the number one chance at success in the future? With this article, I want to compare the Christian faith to giving away the number one draft pick.

At the very basic core of Christianity, God gave away his #1 player when he sent his son Jesus to earth. He got nothing in exchange. There is no draft pick that we could offer God in exchange for his sacrifice of his son, Jesus. It’s a completely one-sided exchange.

What would prompt God to make this kind of insane arrangement? Why would an all-sufficient, all-powerful God be willing to give this much and gain nothing in return?  I believe when you properly understand “the gospel”- the great exchange that God makes with sinners- all of us should ask questions like this.

When God our father called on his son Jesus to go serve him by living on Earth and giving his life as a sacrifice for our sins, there was nothing you or I could offer to God in exchange that would make this a fair trade. God’s act was the ultimate demonstration of unconditional love.

Jesus’s sacrifice on the cross was the ultimate demonstration of a life surrendered to the will of God. And Jesus didn’t hesitate when he got the call to serve the Father.

No team starts the season with an unlimited number of players on the roster. During the offseason, teams go through a rigorous training process. Training camp is designed to teach the strategies that the team will use during the course of the season. The training camp is also designed to help teams determine who will go forward and whom they will have to let go from the roster.

These are some of the most difficult choices a coach will make. Sometimes a player has a whole lot going for him, yet the coach must let that player go to keep a player that is more necessary to the immediate success of the team.

By the middle of the season, you can tell clearly which mistakes or brilliant moves a coach made in selecting the final roster. The decision to cut a player is just as important to the success of a season as deciding which players will wear the jersey.

At the very beginning, God put a plan in place to rescue humanity from our sins. From the time that Adam and Eve committed the first sin in the garden of Eden, God knew that in order to rescue men and women, he would have to give up his only son. God would give up his greatest player and get broken, unskilled players in exchange.  That’s a picture of what he did for you and for me.

Every player on any team, regardless of the sport, is ultimately working for the purpose of winning a championship. Everyone wants to wear that champion ring. That makes total sense to me. Why else would a player pour all of his or her energy into practice and give everything on the field of competition if not for a chance to win the championship?

The trades that are made in the offseason and a team’s strategic moves with its draft pick are all made for the purpose of winning the championship. It all goes toward this one objective.

With the Christian faith, there is one singular, overarching goal. That goal is a perfect relationship with God the Father. Unfortunately, sin makes that goal impossible. Sin separates us from a perfect God.  Because he would be unjust to tolerate sin, the only way for God to accept humans into a relationship with himself is to clean us up and make us perfect. This is the price that Jesus paid for us on the cross.

Because God wants you on his team, he sent his son, Jesus. And Jesus did more than simply take away our sin. Simply removing our sin doesn’t make us good; it only means that we are now morally neutral. Jesus not only took away our mistakes and failures; he also gives us credit for the perfect, righteous life that he lived on planet Earth.

This is the gospel- the great exchange. It is getting something that we don’t deserve with nothing to offer in return. It’s through Jesus’s great exchange that you and I can wear God’s championship ring.

The next time you see a player make an amazing catch or break tackles all the way to the endzone, think about the gospel. Consider what the game would be like if there was nothing to reward that kind of spectacular play.

Remind yourself of what God gave up in order to clean you and make you holy in his sight the next time you watch a college or professional football game.