Thank a vet for the taste of freedom 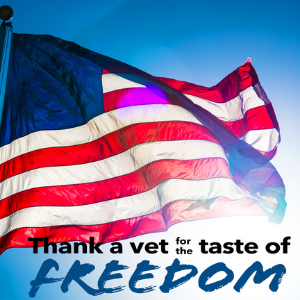 “Freedom has a taste to those who fight, and almost die, that the protected will never know.”

This quote was framed and given to me as a gift from a friend, who is a Vietnam veteran.  The quote itself is inspiring. However, the story behind the quote is equally inspiring.

My friend said that this quote was discovered on a “piece of garbage” lying on the floor of an Air Force jet.  As the aircrew was cleaning up after delivering the last remaining prisoners of war from the famous Hanoi Hilton in North Vietnam to US territory at Clark Air Force Base in the Philippines, the crew noticed a piece of crumpled up paper on the floor of the aircraft.

The airman who claimed the aircraft thought nothing of this piece of garbage until he noticed a scrawled handwritten note on what he thought was a piece of garbage. It appears that one of the prisoners on that flight smuggled this quote out of the Hanoi Hilton upon his liberation.

Although the quote itself is worth remembering, the circumstances behind the quote make it all the more memorable. On this Veterans Day 2020, I want to take a moment to discuss what true freedom tastes like.

A taste of real freedom

What did the author of this quote know about freedom that most of us don’t know? The answer to that question is found in the word taste.  The word taste is a fascinating choice in this quote. Why would the anonymous author use the word taste to describe freedom?  Most people would not use that word.

However, you must get something inside of you to taste it. When the author of this quote described the taste of freedom, that person was describing the most intimate way to understand freedom. This is not freedom from a distance; this is the most intimate understanding of freedom possible.

No sacrifice, no freedom

Notice also that the anonymous author used the word protected in this quote. It is built on a dichotomy between the protector and the protected. This quote says that there is an understanding of freedom that is only possible by sacrifice.

Those who have been given freedom without any real sacrifice will never understand the true value of this precious gift. When you were a teenager and worked hard for many months saving up a lot of money to buy your first car, that vehicle was a precious treasure. It didn’t matter what that car looked like. Because of the hard work and sacrifice it took to purchase that first vehicle, your car was probably a precious treasure.

That’s the same idea the author of this quote has about freedom. Freedom is going to be much more valuable to the person who has worked hard, put it all on the line, and has been willing to make the ultimate sacrifice for it.

Since we’re on the subject of sacrifice, today is the perfect day to thank a veteran for the service that he or she has done for your freedom. The United States celebrates Veteran’s Day as a way to remember the millions of people who participated in the Great War. On November 11, 1919 at 11 o’clock in good morning, the Armistice was signed that ended the War to End All Wars. All across the world, people began celebrating their freedom at 11 o’clock on November 11th.

This national holiday isn’t an opportunity to spend a little bit of time with your family. Rather, this holiday is designed to help Americans consciously think about their freedom and the men and women who fought and almost died to protect it.

On Memorial Day each year, the citizens of the United States remember those who gave the ultimate sacrifice for their freedom. Veteran’s Day is a holiday designed to remember people who went through the hardships of battle for our freedom and survived.  Take a few moments today and thank a veteran for his or her service to the nation and sacrifice for your freedom.

A prayer for freedom

Your form of government could change, and someone could take away your freedom as a citizen of the United States. Or, even within your own country you could lose your freedom by being thrown into jail. These types of freedoms are all temporary and highly fragile.

Only a soul-level freedom is permanent and cannot be taken away from you. No one can put chains on the human soul. When your soul is free, you are fully and totally free. I believe this is the type of freedom that the Bible has in mind when it says, “For freedom, Christ set us free. Stand firm, then, and don’t submit again to a yoke of slavery[1].”

This verse challenges us to remember how precious that freedom is. Today, I pray that this verse would challenge you to taste freedom from the perspective of what it took in order for Jesus Christ to set you free. I also pray that you would allow nothing again to enslave your soul once it has been set free.