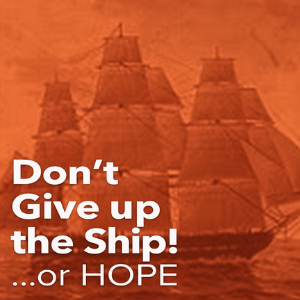 One of the most famous quotes in the US Military are the dying words of a naval captain to his crew during the US War of 1812.

Lawrence took command of the Chesapeake while it was still being outfitted in Boston Harbor. Although his vessel wasn’t fully outfitted, nor did it have a full complement of crew, NOR had the crew the opportunity to train together, Lawrence immediately took his vessel to war.

Facing off against the British warship HMS Shannon, which was blockading the Boston harbor, Lawrence put his men in battle against a ship that was similar in size and capabilities but with a crew that was far superior in size and training to his own. [1]

Neither Lawrence nor the Chesapeake were ready for this battle.

Unfortunately, Lawrence was mortally wounded during this engagement. His last words to his crew before passing away on the deck of the Chesapeake were, “Don’t give up the ship!” Even in death, Lawrence hoped for victory for his crew and the future of our young nation.

Living by hope, not fear

Lawrence’s last words became a rallying cry for the US Navy. In fact, his dying words became an unofficial motto of the Navy. Lawrence’s personal friend, Commodore Oliver Perry, flew this motto as the personal flag on his ship. Lawrence’s words helped sailors in countless naval engagements against the British Navy until the end of the war. [2]

The US Navy battle cry during the War of 1812

All of us face challenges and difficulties. Maybe they are not as severe as what captain James Lawrence faced at the Battle of Boston Harbor, but we all face obstacles.

When those challenging times come, we have two options in front of us: Let fear overtake you, or hold onto hope.

When you’re facing dire circumstances and you’re not sure how things are going to turn out, it’s easy to fall into fear. But, you don’t have to live by fear. When you make choices based exclusively on fear, I can assure you they will be bad decisions.

Hope helps you temper the fear when life gets overwhelming. If there was ever a man who faced hardship and difficulties, it was Nelson Mandela. He said it this way: “May your choices reflect your hopes, not your fears.”

Hold on to hope, and it will hold on to you

Hope is what helps you hold on during the long, dark night. Hope causes you to get up tomorrow and face your challenges, believing that things will get better.  I don’t know what the future holds for you.  Neither do you.  It might get worse before it gets better.  But I know this: It won’t be like this forever.

I have counseled scores of people who were considering suicide. On every occasion, at some point that person had lost hope. Hold on to hope like your life depends on it… because it just might.

If you will hold on to hope in the most difficult and desperate of all circumstances, hope will hold on to you. Here’s the link to a video that I did while speaking to the crew of the movie Overcomer before presiding over the funeral of a solider who had lost hope. This short video explains why you can have hope no matter the circumstances of life.

Hope with a solid foundation

I want to conclude by telling you about the foundation that your hope must be built on. Your hope will let you down unless you place it in something bigger than yourself. You need a source of strength that is bigger than your problems, and the birth of the Lord Jesus Christ offers hope to all mankind.

No matter how challenging the future looks, don’t give up hope!  For more, here’s my latest sermon about hope!

Read about how to overcome fear in the most intense circumstances

Look for it on your favorite podcast platform