ANGER- a powerful and dangerous tool! 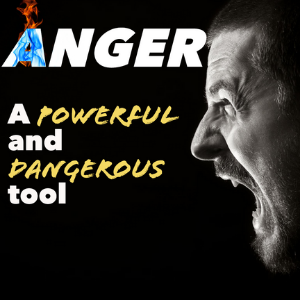 I once worked for a leader in the army who had a psychological or personality disorder. I’m not using these words lightly. Although he never admitted it, I think he literally had a mental illness. (For any of you who have been diagnosed with a mental illness, my heart goes out to you.)

I used to refer to this leader as Dr. Jekyll and Mr. Hyde. One moment he was a mild-mannered, even-keeled leader; the next moment he would become a raving lunatic!

Everyone walked on eggshells around this man. (I will not name him here because he’d probably sue me for slander for my opinion. But, I’m being absolutely honest.) No one really knew what kind of reaction he or she was going to get from him from one moment to the next. This leader would be a completely different man in an instant.

I think he fired me more than 50 times.  When I did something wrong in the unit, he would blow his top, scream and yell at the top of his lungs while telling me to go find another job.  5 minutes later, he would pull me off to the side and in a very calm, normal voice explain to me what I did wrong. I had to ask him during a few of these normal exchanges if I was still “fired” because I could not tell where I stood.

I learned a lifelong lesson from this leader.

He showed me just how powerful anger is as a leadership tool. But, he also showed me through his personal actions just how dangerous anger can be when used inappropriately by a leader.

When the boss gets mad

If you’ve ever worked for a boss who frequently lost his or her temper, you know how unsettling it can be for everybody in the workplace. Or, perhaps, you had a parent who would fly off the handle for no reason. This really creates a difficult home or work situation.

We all get mad on occasion. There’s nothing wrong with the emotion of anger. However, when someone’s anger is unpredictable or uncontrollable, then it becomes very dangerous.

I can’t tell you how many parents I’ve seen that go “bezerk” on their child without ever warning them that they were doing wrong. How on earth is the child supposed to know what correct behavior looks like if all they know is mom or dad’s anger without warning?

Like an unpredictable parent, my boss’s notorious outbreaks of anger became a running joke with my army buddies. Thus, the outbreaks were ineffective at leading to positive change. Often, I would tell them that I just got fired again- for the 50th time- because the old man is in “one of those moods” again! It was our way of warning each another about his unpredictable leadership.

Anger, when properly directed, is a very powerful emotion. Anger, when improperly or unpredictably directed, can be very damaging.  Anger is the human way of showing people what is most important to you.

When we feel a sense of injustice, it naturally causes all people to experience anger.  I’ll say it again: Anger is not necessarily a bad emotion. However, it is a powerful emotion.

The REAL challenge is the way in which a leader handles his or her anger. When you mix the power of leadership with uncontrolled or unpredictable anger, it leads to a dangerous combination for everyone involved.

Be careful with your anger, because according to James 1:20 in the Bible, human anger does not lead to the righteousness of God…which naturally leads to the question, well then, what does godly anger look like?

There are many passages in the Bible that describe the anger of God.  He is both loving and just at the same time.  His justice requires God to become angry at evil.  His love provides the ultimate solution for evil in our world.

The Bible doesn’t condemn people for getting angry.  It’s a natural human emotion.  However, the real challenge is to get angry at the things that anger God.  This is part of what it looks like to show Godly anger.  When a boss or a parent lashes out in anger over an insignificant issue, this distorts the image of God and the gift of power that he gives to leaders.

However, for most people (this is also true of me) the greater challenge is to express our anger in the right manner.  People show godly anger when they get mad for the same reasons that God gets mad and express anger in a similar manner as God.

Anger, when expressed in a godlike fashion, kept in check through love, can have a positive impact on a situation.  Ungodly anger can have devastating consequences.

Be very careful with your anger.  It is a powerful leadership tool for motivation and correction… but a very dangerous tool at the same time when out of control and not used for the right things.

If you struggle with anger, I would like to pray for you. Email me at info@jeffstruecker.com