A Detour to God’s Glory 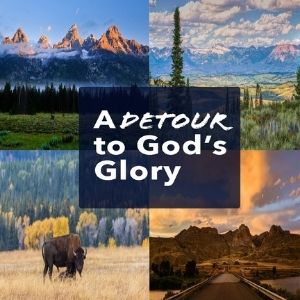 An unplanned detour led to an unexpected discovery about the glory of God while driving across America a few years ago.

I was moving across the country from the Pacific Northwest of Olympia, Washington, to the colonial Southeast of Charleston, South Carolina, as part of a new US Army assignment. The moving company had already packed up our house and loaded it on trucks.  Everything we owned was being shipped ahead of us, so that it would be there when we arrived.

I had just competed several years of back-to-back combat deployments and a challenging assignment in the 2nd Ranger Battalion. My next assignment was a 6-month training program in South Carolina, and I had nothing planned but a leisurely trip across the country with my family.  Our plan was to spend more than a week enjoying the scenic summer beauty of North America.

Because I didn’t know that route (and this was back before the days of turn-by-turn navigation provided by cell phones and GPS), I was following a route that I had printed off from my home computer before we started our cross-country journey.  On our second day of this trip across the continent, we ran into wildfires that closed a major interstate across the country.

Apparently, just before we started this trip, a small fire in Wyoming had turned into a major wildfire that was burning out of control and was consuming hundreds of thousands of acres of Big Sky Country by the time we got there.

The fires were so intense and unpredictable that firefighters couldn’t get it under control. The smoke was so thick that it was a health hazard, even to drivers traveling at 75 miles per hour on this major US interstate.

These conditions forced local officials to close the interstate and re-route people around this massive wildfire. It’s unnerving to trade the familiarity of a major interstate for totally unmarked, tiny backroads through some of America’s largest tracks of land preserves. Without real-time directions, this was the equivalent of driving down dark country roads with no headlights, compared to traveling down a familiar city street that leads home.

This detour taught me a valuable lesson.  I was frustrated by this unplanned detour, and I was concerned for my family, but I was also overwhelmed by what God taught me on this leg of our family adventure. Here’s what I learned on the backroads of Big Sky Country.

I spent hours traveling down the lonely backroads of Wyoming. There hadn’t been enough time for the State Patrol to set up detour signs; my family was on our own to figure out this detour without a map.  When I started on this massive detour, I was just focused on not getting lost.  -So focused, that I missed the beautiful scenery around me for hours.  More than 1 hour into this detour, I started to notice the beautiful mountain views and the amazing scenery around me!

The world became alive with pastures and valleys that I wouldn’t have seen from the interstate.  Every turn in the road showed an even more beautiful view.  Every hilltop revealed another majestic vista! None of these views were visible from the busy intestate.

The detours of life are always unexpected and often unwanted. But, that doesn’t mean they have to be unpleasant!  Sometimes God sends you down a detour in life to show you a view that’s not visible from your busy, normal routine.

Detours are also reminders that you’re not in total control.  It’s easy to think that we’re masters of the universe when we’re driving across the interstate with total control over our vehicles. Detours remind us that you might have “some” control over the vehicle you’re driving but not over the road you’re on.

I think God sends detours in our life to remind us he’s ultimately in charge.  Sure, he lets us have control over some areas of our own life- just like you control the speed of your truck headed down the interstate.  But, the detours are also vivid lessons of what’s not ultimately under our control.

That massive detour added hours to our family journey across the country. I learned to enjoy the beauty of God’s creation on this several-hour detour. God reminded me on those backroads of Wyoming that he is in absolute control… not me! Those backroads reminded me that Jesus is with me on the detours as well as on the busy interstate.

I also learned that God has many routes to arrive at his destination for me.  Eventually, my family arrived in South Carolina. The journey took me longer than I expected and down roads I didn’t want to travel, but in the process, I drew closer to my Father in Heaven, who was guiding every mile of the journey.

I still remember the beautiful scenes that I saw on those backroads. I sometimes long for detours to show me things about life and about God’s goodness that I pass right by in my busy routine of life.  Today, I pray that you will embrace the detours of life.  Let them slow you down long enough to see the beautiful views around you.  God just might surprise you with unexpected glory down those unplanned turns of life.